Preface to book ‘My second career: A collection of artwork by Dr Anthony P Yim’ 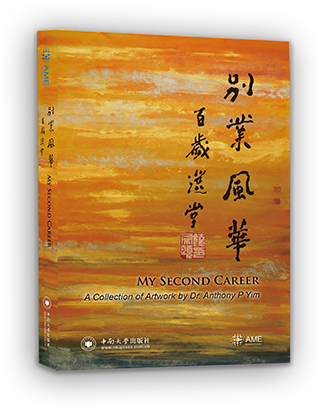 From my very earliest years, I have always been fascinated by art. The art class was always my favourite at school, so much so that, when I was a teenager, I seriously thought about pursuing a career as an artist. I remember my first encounter with art outside class was not creative in nature, but to imitate. I liked drawing banknotes. I did that not because I was money crazy but I was attracted by the designs, colours and details in banknotes and learnt a lot from studying them. I would carefully go into detail with the finest pens and colours that matched the original. Although the paper I used was of course very different, the resemblance of my imitation was close enough to the real money that my late Mother actually panicked and insisted that I destroy all my artwork before I got charged for making counterfeit money! Many years later, she told me that she deeply regretted it.

However, when I discussed with my late Father my inclination to pursue a career in art, he took time to explain to me that the life of an artist was not always easy, and one had to be prepared for hardship not only for oneself but also for the family. More often than not, and even if the artworks manage to sell for millions of dollars, it often happened after the artist was long dead! My Father was quite persuasive, so I ended up going to Cambridge to read medicine. To be fair, my Dad never stifled my interest in art. He travelled widely and had made many friends, including artists. He introduced me to the late Master Yang Shanshen , SBS (1913-2004), who was an internationally acclaimed Master of the Lingnan school of art, and he coined the term “ Lingnan Spirit” in one of his books. He studied under Insho Domoto in Kyoto, from 1935 to 1938, who had a profound influence on his later work. I became a frequent guest at his home which was not far away from where we lived. He liked me and generously gave me some of his paintings and I learned a lot by simply studying his work, especially his strokes and choice of colours, even though he rarely allowed anyone to watch him paint, myself included .

My first oil painting was a still life on fruits, including a bottle of wine as shown here. I took the bottle of wine with me from the plane on the way to visit my sister, Elizabeth, and her husband, Joseph in Ann Arbor, Michigan during my gap year in 1975. I had already been accepted by Queens’ College, Cambridge to read Medical Sciences Tripos but was waiting for entrance that summer. I had no formal training in oil painting at the time but Elizabeth, who also paints, generously allowed me to use her canvas and colours. It took me about a week to finish my first painting and by the end of that week, the carrot began to rot at the tip which was also captured! I painted several oil paintings in Ann Arbor and initially wanted to continue painting at University, but three years of intense study at Cambridge followed by three years of clinical school at Oxford, made that very difficult, if not impossible. After graduation from Oxford University Medical School, I completed prestigious house officer and senior house officer jobs under Professor Sir Peter Morris at Oxford and Professor Sir Magdi Yacoub at Harefield, and I knew then I wanted a career in Cardiothoracic Surgery.

Figure 1 The author’s first oil painting of still life was completed in 1975, when he was sixteen years old.

I chose surgery because I knew I was good with my hands, and the cardiothoracic specialty because of my keen interest in heart and lung physiology. Like many high flyers at the time, I sought formal residency training in the United States- General Surgery at the University of Chicago Medical Centre and Cardiothoracic fellowship at the Massachusetts General Hospital in Boston. Following my residency training, I returned to Hong Kong in 1992 and joined the Department of Surgery of the Chinese University as a lecturer in Cardiothoracic Surgery. I dedicated my career to the development of Minimally Invasive Thoracic Surgery, and had a highly productive and successful academic career. I was promoted to be the Chief of Cardiothoracic Surgery in 1995 and Chair Professor of Surgery in 2002. During this time, I travelled extensively to lecture and often to operate in the host country. This gave me a chance to learn about foreign cultures first hand. My work schedule was very tight, and generally would not allow me to visit the museums, let alone paint. Instead, I became an art collector.

I left the Chinese University in 2007 for full time private practice. Once again, I had a busy and very successful practice which attracted patients from all over the world to come to Hong Kong for surgery by me. Maybe because I was working too hard for too long, my health started to deteriorate in the early 2010s and I was forced to first slow down and, in 2013, went into semi- retirement, which essentially meant doing less operating. I planned for full retirement from surgical practice by 2017. I was initially very apprehensive about leaving a highly successful practice for art, but in retrospect, that turned out to be one of the wisest, major decisions I have made so far.

I hope my experience can provide some insight for some of my peers who may be contemplating retirement. Sure, being a surgeon is a privilege and a noble profession, and we must love what we do to get to where we are today. However, one must realize there is a whole new world outside medicine and we can only appreciate that when we take a step back. For me, for example, not having to hop from hospital to hospital to clinic gave me the chance to appreciate the finer things in life- I began to notice the colours of the flowers in the lobby and the smiles of the concierge team members. These fine details have given me much inspiration and substance for my subsequent artwork.

They say that as one door closes in life another opens, and I am very lucky in my new situation to have art to fall back on, not least because it has opened up whole new horizons for me. Art transcends time and space, cultures and language barriers. Art represents a nonverbal means of communication between the artist and the viewers. On the surface, there seems to be little in common between a surgeon and an artist, but having been both, I believe there are more similarities between the two career paths than most people may think, despite also major differences. I look at art as a pursuit of perfection, and a good surgeon, like a good artist must be a perfectionist at heart. Simply put, a surgeon is performing art everyday in the operating room. This is also where the similarities end. In complex operations, in order to produce the best, predictable outcome, the surgeon and the team must follow a protocol from the skin incision down to when we put on the dressing. This is in sharp contrast with art of which one major ingredient is creativity, and mass production is frowned upon. However, while each operation may be protocol-based, it is increasingly recognised that a major surgical advancement or breakthrough requires innovation. This brings surgery close to art once again.

I would like to take this opportunity to thank my teachers at the Kinnet, the recreational centre where I used to paint- Jenny Chan in porcelain painting, HT Fung in Acrylic painting and Nicholas Wong in watercolour. Most of all, I am grateful to Ms Suet Ping Fung who taught me everything I know about Chinese painting. We explored mixed media on Xuan paper together and, with time, we have become very close friends. Through these classes, I also met a group of energetic ladies with a similar interest in art, some of whom no doubt will remain good friends.

In May 2017 at the American Association for Thoracic Surgery (AATS) Centennial meeting Member Art Showcase, six pieces of my artwork, which included one porcelain, two water colour and three Chinese paintings, were selected for display. This is exceptional as the Association normally does not select more than two items for exhibition. AATS by the way, is the oldest and most prestigious professional organization for my specialty with a very stringent criteria for membership. I am one of the earliest members from Asia. After the meeting, I was kindly approached by Dr Stephen Wang, founder and CEO of AME, who kindly offered to publish this art album. I am truly grateful to them for giving me the opportunity to share my work and thoughts with you.

I am also deeply honoured and grateful to my former boss and good friend, Professor the Honourable Arthur KC Li, GBM, GBS, JP for writing the Foreword to this album. I am indebted to the widely internationally acclaimed sinologist, the late Professor Jao Tsung-I, GBM who left us peacefully on February 6, 2018 at the age of one hundred, for gracing this album with his calligraphy of his suggested Chinese title for this album. We lost a giant in Chinese art and culture but his legacy will be greatly treasured, and his scholastic spirit will live on.

Much care has gone into the preparation of this album by the expert publishing team, especially Grace, Lareina and Ivy. I am grateful to my friend, Kazaf Cheung, and my daughter, Katrina for taking some of the pictures of my paintings. However, any omissions or imperfections are entirely my own. This album not only serves as a landmark of my own initial progress in the pursuit of art, but more importantly, is a reminder that the quest for art lies within us all. We must not be afraid to explore that hidden desire inside each and everyone of us, and to express it in a form, whether it be a painting, a sculpture or other. After all, art can be a powerful therapy for our stressed out mind and body. In any case, I do hope you will enjoy the paintings in this album as much as I do.